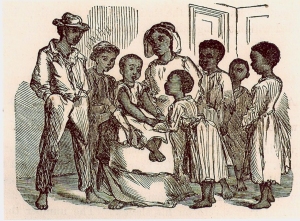 Ann Marie Jackson and seven of her children (image from Breaking the Chains: Presenting a New Narrative for Canada’s Role in the Underground Railroad)

Routes to Freedom explores the remarkable flight and life of enslaved Black woman
Ann Maria Jackson who fled to Toronto via the Underground Railroad, from Delaware with
seven of her children in 1857. The discussion revealed how Jackson, drawing on the resiliency
of her African foremothers built a life for her family during the middle decades of 19th century Toronto. The presentation also addressed the early history of Black people in Toronto, through the life of
Peggy Pompadour, a local woman who was enslaved by colonial administrator and Toronto City father Peter Russell. Both stories reveal the multidimensional nature of Toronto’s Black history:
for some, it was a place of freedom; for others, it was a place of oppression.
This talk took place on January 20, 2011.

Afua Cooper is a historian, author, and dub poet. She holds a Ph.D. in Canadian History
and African Diaspora, with an emphasis on Black communities in 19th century Ontario.
Visit Afua Cooper’s website for more information.

St. Lawrence Hall was built in 1850 as a space for public meetings, concerts, and exhibitions.
The City of Toronto restored the hall in 1967 to mark the national Centennial.  Visit St. Lawrence Hall for more information.

Use it in the classroom